(The following information was taken from the Texas Historical Commission web site.) 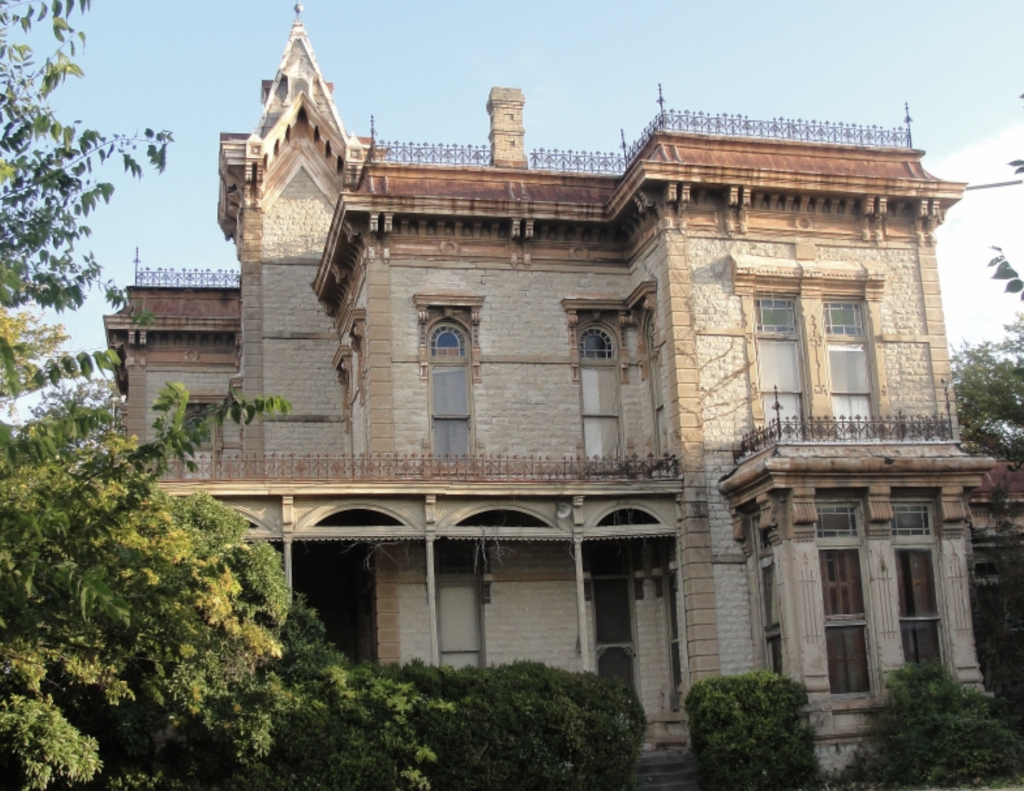 The Waggoner Mansion or El Castille, as it is sometimes called, is an excellent example of Texas’ finest Victorian masonry architecture. Built in 1883, the house has retained approximately ninety percent of its original craftsmanship and material. This percentage far exceeds most large Victorian homes of this nature that remain in such a good state of repair in Texas, and consequently by all means this home can be classified as being “authentic”. Both the exterior and interior walls are of solid poriferous limestone construction. Although the exterior is in a good state of repair, it is in need of preventive maintenance such as painting and minor material replacement. Exterior cornice detailing, opening trims and porch construction are combinations of wood and metal. Grill work on the exterior around the roof is original, although the grill work around the porches of the house has been added after 1941.

The house contains a large basement, sixteen rooms and six and one-half bathrooms. There are two bedrooms downstairs and four upstairs. The interior of the house is in very good condition. The intricate woodwork, hardware and finishes are well maintained and only portions of some ceilings and upper walls are in need of any repair. There are many distinguishing features of the home. They include 18 ft. ceiling heights downstairs, 16 ft. ceiling heights upstairs, intricately carved door mouldings on all the interior doors with a Texas “LoneStar” motif carried throughout the house, brass hinges, doorknobs and miscellaneous hardware, frescoed ceilings in a few of the rooms, stained glass transoms above all doors and windows, interior wooden shutters on all windows, eight fireplaces each with decorative tile insets, light fixtures, especially made for individual rooms and marble lavatories in all of the bathrooms. An artisan named Decker was brought from France to the Waggoner Mansion at the turn of the century to add the fresco decorations in some of the rooms. Decker signed one of the compositions in an upstairs room.

Only a few interior alterations have occurred. For example a butler’s pantry has been converted into the kitchen. The original family kitchen is now used as a family living room-den with a fireplace that had previously been walled up. The fireplace was probably sealed when the home was restored by William Thomas Waggoner in 1931.

The house was built and owned by the Waggoner family from 1883 until 1906. In 1906, the mansion and surrounding acreage was traded by W. T. Waggoner to Samuel Bellah, III for a ranch in Baylor County. It was home to the Bellah Family until after the death of Mrs. Bellah in 1929 when Mr. Bellah sold it back to the Waggoners. The mansion was purchased by Mr. and Mrs. Phil Luker in 1942. The Luker family have lived in the house since their purchase of it.

There is a separate addition to the house at the rear. Out buildings include a wooden smokehouse, storm cellar, and a more recent four car garage with stables underneath. To the northwest of the house stands one of the original bunkhouses used on the Waggoner Ranch.

This impressive masonry Victorian house was the home of the Waggoner family, prominent in the early days of ranching in Texas. In the boldness of the style and in the strength of the material the builder achieved an appropriate expression for the original owner, Daniel L. Waggoner, and the times he personified.

In the middle of the nineteenth century, Dan Waggoner drove a small herd of Longhorns into Wise County and launched a successful career that by 1870 earned him the recognition of being a “cattle king.” At the time he built this baronial mansion it was the headquarters for the distinguished Waggoner Ranch which reached into a seven county area. By 1900 this sixteen room two story house was the headquarters for this well-watered and compact ranch that spread thirty miles east and west and twenty-five miles north and south, and included over a million acres. The Waggoner Ranch supported over 60,000 head of cattle, and it was served by three separate railroad lines. Dan Waggoner died in 1904, and this house became owned by his son, William Thomas Waggoner. After oil was discovered on the ranch in 1903, development resulted in the founding of the Waggoner Refinery in 1911. The fortune which resulted from this cattle and oil base enabled the Waggoner Family to become one of the richest and most influential families in the Southwest.

In 1931, W. T. Waggoner restored the home. After the death of W. T. Waggoner in 1934, the house was sold to Mr. and Mrs. Phil Luker in 1942. The moviemakers of the film “Giant” duplicated the exterior for the movie set. Thus, the Waggoner mansion is one of the foremost and striking architectural remains of the indelible marks left by the cattle empire of Victorian Texas.